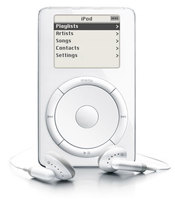 The first iPod was released back in 2001, introducing Apple to the music industry with a bang. Back in 2001, MP3 players weren't all that great. They were either ugly and huge but could store a fair amount of songs or pretty and slim but were useless. Until the iPod came around, lots of people still liked their trusty Sony Walkman or just put on a record. The iPod defined how we listen to music today.

But now that the competition in the music player department is evolving, the iPod kind of just sits there now. Basically any smartphone today can double as a music player, which is dangerous for MP3 players, including the iPod. Both the iPhone and iPad, Apple's other products, can both play music perfectly well, whether it's with a pair of headphones or through the speaker. So with this in mind the question rises: is the iPod dying?

Well, sorta. Apple has already discontinued the iPod Classic, a revised model of their first music player, with a capacity of a whopping 160 GB. The California company killed it off due to the fact that they couldn't get the parts needed to manufacture them anymore. So it makes sense to discontinue them if you take under consideration the design and functionality along with non-accessible parts. But that doesn't entirely give Apple a reason to kill off one of it's best products, right? Surely, you need more facts. More data. More reasons. Well, (sadly) here it is.

iPod sales haven't spiked since 2012 when the latest generation iPods were announced and released. Of course, Apple has sold them and made profit, but it's not the bread winner. iPod sales have been decreasing since Q4 of the 2012 fiscal year, setting the iPod in a category that's "just getting by".

And Apple realizes that, which brings us to one of the most interesting moves the tech giant has made yet: they've moved the link to the iPod webpage on their website to the bottom of the Apple Music page. Now instead of seeing the word "iPod" on the website's menu bar you see "Music".

What does this mean for iPod fans around the world? Well, it could potentially mean that Apple is preparing to discontinue it's lineup of music players.

Of course there's always hope though. There have been rumors of Apple refreshing the iPod lineup with new colors, giving it a fresh look, and speedier processors, like the rumored A9 chip which will most likely make it's way in to the next-gen iPhone first, but if that's all Apple does with it, they will most likely see the same results they had when they refreshed it back in September of 2012.

But, for all we know, Apple will come out with something so extraordinary that their sales will skyrocket. But as we've seen with a few of their products before, only time will tell.